Vogue and the “Stout” Older Woman 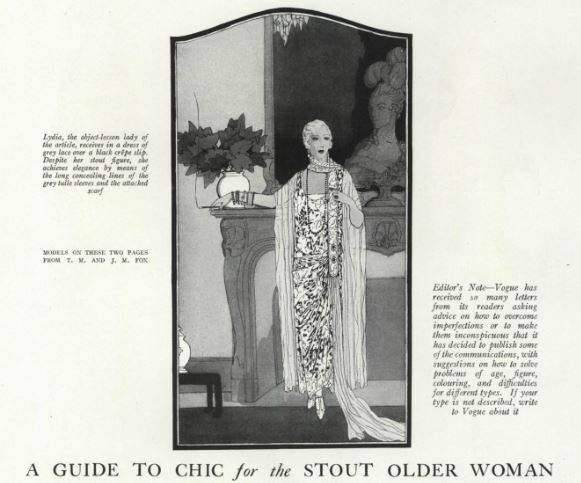 Although Vogue magazine was not very sympathetic to women who carried extra pounds, there was one area where the magazine was more forgiving—the fashion dilemmas of older women. Long before the era of Mrs. Exeter, Vogue editors realized that aging was inevitable, and that it often meant putting on weight.

A case in point was an article entitled “A Guide to Chic for the Stout Older Woman,” (April 15, 1924). It featured a wealthy New York society woman named Lydia Bulkley, who was “quite short, rather stout, and very, very chic.” Although she once had the smallest waist in New York, it was now twice its former size.

But Lydia knew how to downplay her defects, which included a double chin, fleshy arms and her now over-sized waist. Instead she worked to accent her attractive eyes, hair, and feet. When styles featured sleeveless dresses, she used scarves and capes. Even though plaids were in style in 1924, she used them only to trim her hats. She also decided that bobbed hair did not suit her short neck, so she had it cut a little shorter in front to create a stylish look, while keeping it long enough to knot at the back of her head. While she avoided large scale fabrics, she often wore flashy shoes that showed off her small feet.

Although she wasn’t young, looking “youthful” was important to Lydia. “The barrier which existed between the old and the young thirty years ago is melting fast,” she opined in 1924. “Young people are older—really the debutante of today is like a rather sweet, but unusually abandoned, Ouida adventuress, and the old are younger than ever. Why, there are no elderly women! Age is a Victorian mode that will never be revived.”

I think I’ll adopt her motto as my own: “The chic older woman of today must look youthful without appearing ridiculous.” Is is too long for a tattoo?

3 Responses to Vogue and the “Stout” Older Woman