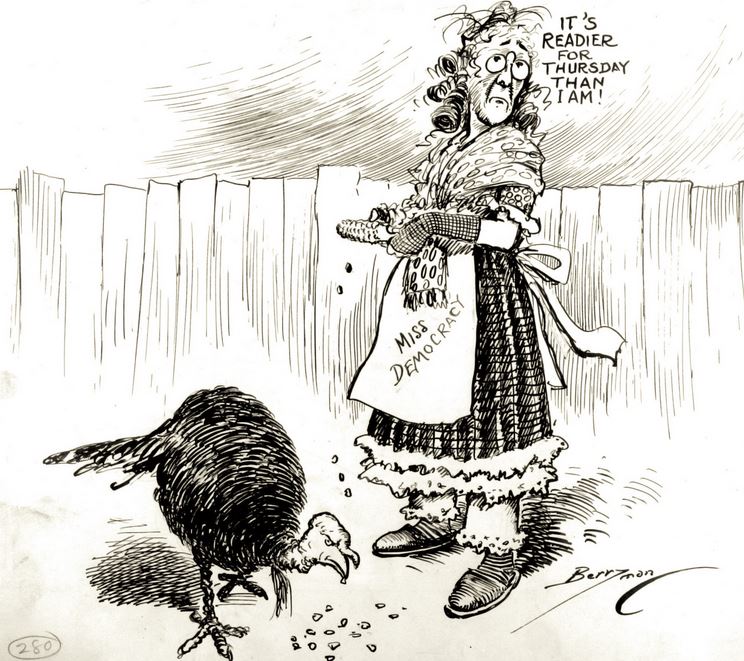 While searching for images of older women and Thanksgiving, I discovered “Miss Democracy,” a recurring character in the political cartoons of Clifford Berryman. Winner of a Pulitzer prize, Berryman is credited with creating the symbol of the teddy bear for Teddy Roosevelt, thereby launching a tradition in toys. He used Miss Democracy to represent the will of the American people, or in this case most likely American women who did the cooking on the holiday.

Much to my amazement, I couldn’t find much written about Miss Democracy except one snarky comment that called her “a giggling, befrilled, corkscrew curled spinster.” The image above is not typical—usually Miss Democracy confronted politicians in some plainspoken way. Presumably an old maid, why else would she be “Miss,” her clothes and hair style change little from decade to decade, and they are always out of style.

There is a long tradition of artists representing abstract concepts as beautiful young women—our Statue of Liberty is a prime example. But Miss Democracy is older and wrapped in out of date clothes, not Grecian robes. I am going to track her down and give a fuller report of this fascinating character, who appeared in Washington DC papers from at least 1904 to 1941.

Book Review: From Paris to Providence
Harriet Strong, the Pampas Woman
At Busch Gardens, 1926
This entry was posted in 1920s and tagged popular culture, satire, Washington DC. Bookmark the permalink.