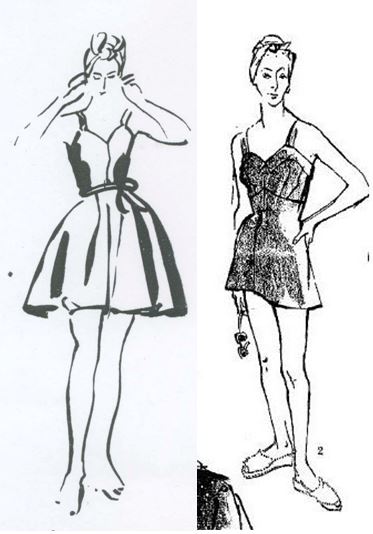 Mrs. Exeter was born on the pages of American Vogue in June 1948. A few months later, in March 1949, a parallel older lady appeared in British Vogue. The British Mrs. Exeter seems to have had a wider cultural resonance than her American counterpart. She appeared in literature and has inspired scholarly articles. My British friend Jane remembers teasing her mother about her “Mrs. Exeter style.”

Did the two figures differ? Let’s meet them at the beach and see. The subject of swimsuits was the very first one taken on by the American Mrs. Exeter in 1948. Her British cousin didn’t get to the beach until July 1950. Both admit loving the sea and use almost identical phrases to describe their experiences. “Thanks to my 33 inch waist I can stay in the water forever,” says the American Mrs. Exeter. Her cousin says the same, but only admits to a 32 inch waist (perhaps post war British austerity explains the difference.) Both seem to have plenty of money, since they solve the problem of finding well-fitting bathing suits by having them custom made.

Whole swaths of the two articles are identical word for word, with Mrs. Exeter’s chatty style extending across the Atlantic. However, the clothes are different. The British Mrs. X wears a slightly more revealing swimsuit. But the American Mrs. X allows herself to lounge on the beach with parts of her upper arms exposed.

It isn’t easy to find British Vogue in the US. Many thanks to Jane, who emailed scans direct from the Bodleian Library in Oxford!

The World of Mrs. Exeter
Half Sizes, Part 3--The Martha Manning Brand
Bessie McHugh from her Thirties to her Sixties
This entry was posted in 1940s, 1950s and tagged comparative, Mrs. Exeter, sportswear. Bookmark the permalink.