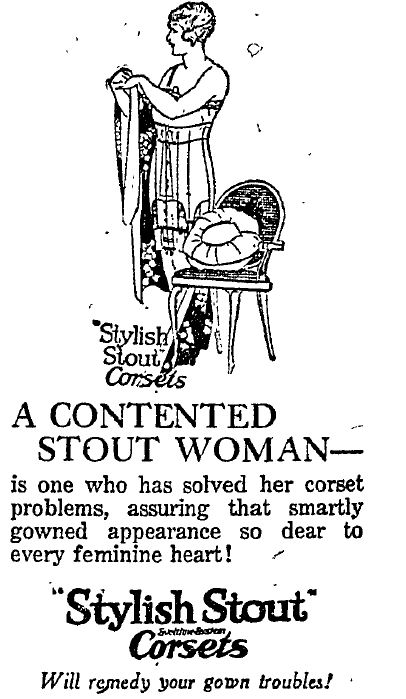 In the era of the pencil slim, boyish flapper, plus size clothing gained a real foothold in the American clothing market. Perhaps this isn’t as much of a paradox as it seems at first glance; larger women who wanted to follow current the styles as much as possible needed special cuts and undergarments. According to Paul Nystrom’s fascinating 1928 book, The Economics of Fashion, (you can find it online here), interest in plus sizes (called stout sizes then) exploded in the 1920s. He estimates that 32% of women clothes were made in “stout” sizes.

Not only that, but Nystrom identified five different stout cuts. The regular stout was an extension of standard sizing proportions, but bigger. The long and short stouts were meant for women who were on average about three inches taller or shorter than the norm. The last two stout categories are particularly intriguing. The “stylish stout” had a bigger bust, longer waist, and smaller hips than average. The “stubby stout” had a smaller bust and bigger hips.

The Economics of Fashion, 464

Before we envy the 1920s shopper, we need to ask if these size ranges were consistent. A short search through newspaper ads and articles shows that they were not. One New York Times article, “Catering to the Stout Trade” (8/13/1922) defined the terms differently. This author called the “stylish stout” a “narrow-waisted, well-corseted woman found chiefly in the large cities.” The “stubby stout” was simply used for short women.

To make matters even more confusing, most ads didn’t differentiate between stout sizes at all. Instead, they used the most attractive label—stylish stout—and applied to any and every large sized garment. It was even a brand name.

On the Road
Three Generations, 1920s
Sensible Shoes through the Decades
This entry was posted in 1920s and tagged advertising, sizes. Bookmark the permalink.

6 Responses to Stylish Stout in the 1920s