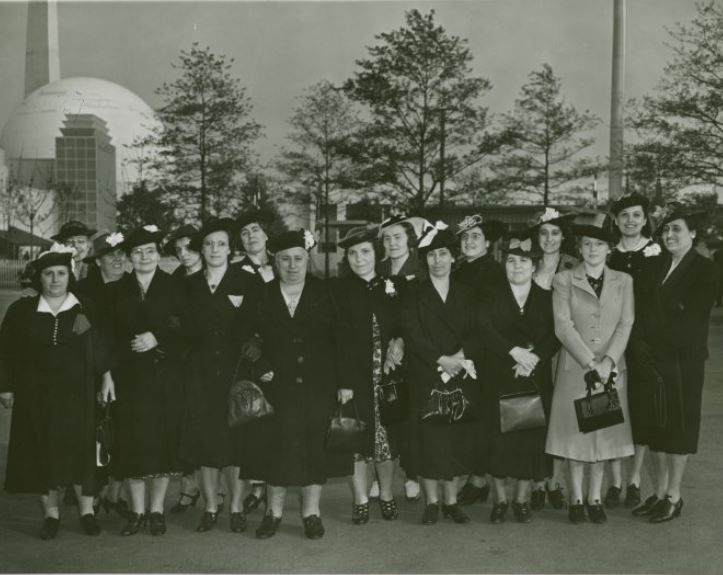 The dome and sphere that you see in the background of this photograph are the two most important symbols of the 1939-40 New York World’s Fair, so famous that they even got their own stamp.  The New York Public Library houses an extensive collection of documents and photographs from fair, including a small scrapbook with snap shots of various women’s clubs that made a point of visiting as a group. This particular club came from the heavily Italian part of South Philadelphia. Given their light weight coats and the foliage on the trees behind them, I’m guess that the photograph was probably taken in the spring of 1940. (The fair ran from April 1939 to October 1940).

I’m always interested in finding generational differences in clothing styles, but there is little to see here. While there is a range of ages in the group, from the sixty-ish woman center left to some very young women on the sides, the clothing is quite uniform. All but two young woman wear dark coats; everyone has on a hat (although only a few clutch gloves.) Coat lengths vary, but that doesn’t break down easily by age.

And look at their shoes! Most are in the sensible lace up oxfords so beloved by older women for decades. Only a few braved another kind of footwear. In his informative study The Seductive Shoe, Jonathan Walford says that the heeled oxford was a favored shoe of working women by the forties, especially nurses.(178) These Italian mothers probably didn’t work outside the home, though. I think they picked this style because it was a  comfortable, yet still dressy, walking shoe.