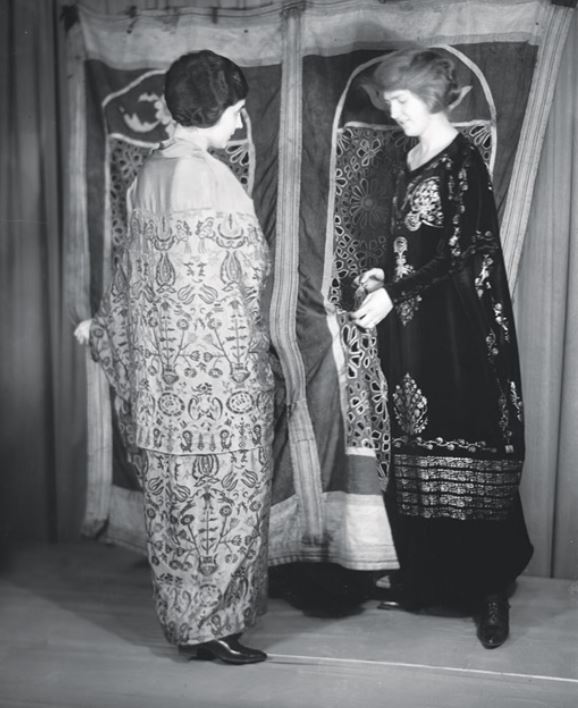 When I first discovered the work of Jessie Franklin Turner, I thought she was a fashion original. Imagine having the vision to turn to museum collections as your main source of inspiration. In this short book, a companion volume to an exhibition at the Bard Graduate Center in 2013-14, I discovered that Turner was not an original at all. She and many others, including the famous textile designer Ruth Reeves, were the beneficiaries of inventive outreach programs sponsored by a number of New York area museums. The institutions opened up study rooms and gave lectures in the hopes of encouraging artists to create designs based on their collections.

The most ambitious of these programs was at the American Museum of Natural History. Here the goal was to create “a national design language built upon the forms of ornament of indigenous artifacts of the Americas.”(14) Organizers shunned European sources and instead focused on Eskimo clothing, Native American beading, and Peruvian weaving techniques. They held workshops for ceramists, textile designers, and sculptors. These efforts were promoted in the fashion industry by Morris de Camp Crawford, an editor of Women’s Wear Daily, associate at the American Museum of Natural History, and collector of Peruvian textiles himself.

These attempts to make a uniquely American aesthetic flourished at the start of World War One, when many Americans believed that they could set a separate path from Europe.  But by the end of the war, one that the US eventually joined, they faltered. Instead, artists began to look far and wide for their ideas. Turner is an excellent example. The designs depicted above, made under her label Winifred Warren and shown at the 1919 Exhibition of Industrial Art, were inspired by textiles from Bukhara and ancient Coptic patterns. While they weren’t exactly what the American design movement had in mind, they certainly were beautiful, original works made in America.