Elizabeth Hilt, Queen of the Shirtwaist 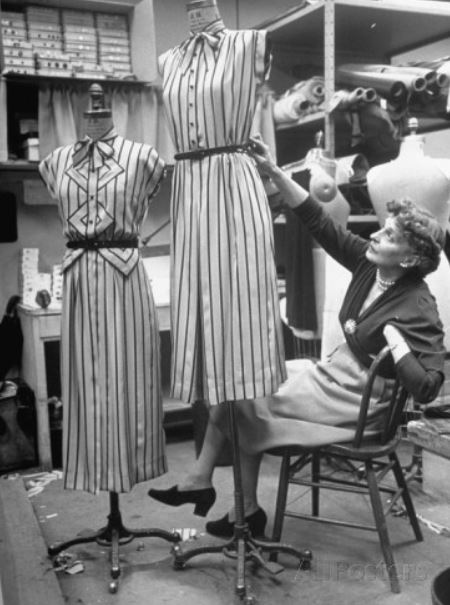 It isn’t easy to track down facts about lesser known designers who don’t show up in the big fashion magazines. Luckily Hilt caught the attention of the New York Times fashion editor, Virginia Pope. When Pope asked Hilt to design dresses for the Patterns of the Times series, she gave her readers background on the woman who had a knack for creating stylish designs for the American mainstream in the 1950s.

Elizabeth Hilt Rosier, born (I think) in 1894, learned to sew as a child but went to business school for her education. That combination of business acumen and sewing skills gave her an excellent understanding of how to make good clothes for a broad audience. “‘I want the dresses I design to be rich and expensive looking for the least money,” Miss Hilt said. ‘That is the spirit of democracy. It is the greatest thing we have to give in this country.'” (Virginia Pope, “Behind the Mass Sales by Henry Rosenfeld is Elizabeth Hilt,” New York Times, April 2, 1951”)

Pope believed that Hilt’s work showed real mastery. “The ‘budget’ dress manages, in skilled hands, to capture the trends of the day without exaggeration.” And Hilt was unapologetic about her attraction to lower prices. “I find that women in all income levels like a smart, inexpensive dress.” (Virginia Pope, “”Popular Price” Dress with Style Created by Elizabeth Hilt” New York Times, January 3, 1955).

This wonderful photo of Hilt at work shows how she simplified a complicated design, on the left, so that the company could sell the dress at a lower price. What the company saved on expensive trims they invested into high quality fabric. If my dates are correct, she would have been around fifty-seven here. Too bad we don’t have a good view of what Hilt was wearing, but it doesn’t look like a shirtwaist.

Turkey Shopping in Boston, 1952
Too Much Tinsel, Not Enough Tree
Robert Frank and the Older Woman
This entry was posted in 1950s and tagged designers, sewing, shirtwaist. Bookmark the permalink.

4 Responses to Elizabeth Hilt, Queen of the Shirtwaist